Good things come to those who wait

In March 2016, after a failed application to the Leverhulme Trust, I applied for a research grant through the Arts and Humanities Research Council, with my Principal Investigator, Prof. Andrew Chamberlain. The competition for research council funding is extremely harsh – with less than 10% of applications being successful, so I always knew that the chances of my efforts ‘paying off’ were slim to non-existent, but in a niche field like animal mummies, there are very few funding bodies who could potentially fund the research so I had to give it a shot. The AHRC has an application turnaround time of 30 weeks, so I waited patiently to find out whether I had been successful. The 30 week deadline came and went, Christmas happened, and I managed to serve out three short-term contracts at the University whilst I waited to hear the result. Finally, in late May, 14 months after the application was submitted, I found out that I had been successful and that the AHRC will fund my research for three years. The grant formally began on July 16th.

Having spent around six months writing and tweaking the application, I had ‘mentally filed’ the project at the back of my mind, whilst constantly wondering what the hell I was going to do as a job if this really was the end of my research career. I had filed the project so far away that I have had to read through the case for support document countless times to refresh my memory on what exactly I had asked for funding for! I even printed a copy and I keep it in my bag at all times to remind myself that it is actually happening.

In essence, the project is building upon the research I have done over the past four years on the Leverhulme Trust grant. That project raised some important questions about votive mummies which are found to contain incomplete animal remains or no animal remains at all. Traditionally recorded as ‘fakes’, produced to dupe unsuspecting pilgrims, their sheer number and the fact that a great deal of time and effort was invested by the ancient embalmers in their manufacture, led me to believe that there must be more to it. I am sure some embalmers were unscrupulous in their intentions, but can we say with certainty that these offerings are all the result of fraudulent practices? Documentary sources, archaeological evidence and non-invasive imaging methods will be used to investigate the mummies and attempt to shed more light on this group of artefacts.

A major part of the project will be to use enhanced imaging methods such as micro-CT scanning and 3D visualisation and replication techniques to help to identify bundle contents. Identifying bones using clinical radiography alone is notoriously complex, especially in the case of animals where the range of taxa which were mummified is so large. Initial research suggests that the use of 3D techniques can improve identifications, thereby enabling the interpretation of this votive practice.

I am very much looking forward to this conducting this research with colleagues in the NHS, the University, Loughborough Design School and the many museums who collaborate by allowing access to their collections. More than anything, this post is about not giving up when all the odds are against you, about not letting listening to all the negative things about funding and about having faith in yourself. Sometimes, just sometimes, that faith pays off. 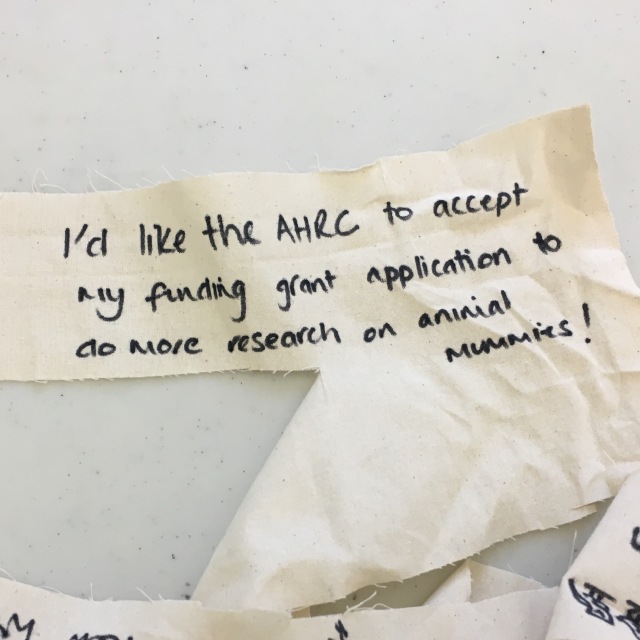