The start of 2015 has been a very exciting time for the Bio Bank project. With the book safely in the hands of the publishers, our attention has turned to planning the exhibition. Just before Christmas, we were fortunate to be able to employ our designer – Andrew Gibbs from Public Works Office, London – to work with us on turning our doodles in a notepad, into a full-blown touring exhibit. We always knew that this was not going to be an easy task, as our three exhibition venues – Manchester Museum, the Kelvingrove and World Museum Liverpool – vary greatly in size, shape and access routes, so designing one exhibit to fit all three was something of a tall order.

After our initial meeting with Andrew where we discussed the themes of the exhibition and the types of objects that are going to be on display, he went away and drew up some ideas of how the finished ‘show’ might look in the Manchester space. Having a creative mind on the case was instantly refreshing and turned our doodles of how we had envisaged the space looking, into a very different layout and one which Manchester has not adopted before. Conversations via Skype (not easy with three people at one end of the line holding up sheets of A3 paper in front of a webcam!) honed the ideas further and we now believe we have developed a great way of using the limited space at Manchester to its maximum potential.

Yesterday, the whole project team met with Andrew at the Kelvingrove to present the initial plans and to suggest how the design might work in the two larger galleries. Being able to ‘walk the course’ round the Kelvingrove space rather than from drawn plans, enabled Andrew to better visualise how things might look and has led to some quite drastic amendments. This is largely based on the gallery having a separate entrance and exit (which is not the case at Manchester where visitors enter and exit through the same doorway allowing for a cyclical exhibition) and a variety of fire exits which have to be kept clear. One bonus about visiting yesterday was that the temporary gallery is closed presently which allowed us free rein to wander, measure areas, check lighting and exits without getting under visitor’s feet! By the end of the day a clearer plan was forming which maximised Kelvingrove’s assets. 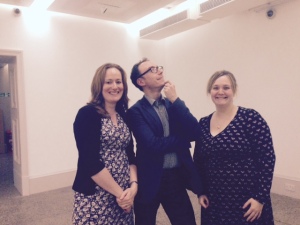 Our next meeting is going to take place at the World Museum Liverpool, our third and final exhibition venue. Although the Liverpool leg of the tour is still 18 months away, it is vital that the exhibit created for Manchester can be moved lock, stock and barrel to Liverpool and be re-installed in their space without it looking dramatically different. In some ways, the fact that Liverpool’s gallery is essentially a large, regular shape, makes this easier as stud walls can be used to partition the gallery into a more management area. Watch this space!