Earlier this year, I was put into contact with a BBC researcher researching potential themes for a new series of documentaries for Horizon. Over the six months or so since this introduction, discussions steered the focus of the programme towards animal mummies (let’s face it, why wouldn’t they want to concentrate on animal mummies, when so much has been done recently on scanning human mummies!?). Tonight, we finished our fourth night of filming for the programme which will air early in 2015.

The programme will cover all aspects of animal mummification, from the sacred animal cemeteries in Egypt where the sheer scale of the practice of votive animal mummification will be portrayed. Filming in the Cairo Museum will showcase some of the better known animal mummies, including cult individuals, pets and victual mummies. Filming also covers demotic papyri in the British Museum, experimental mummification at the University of York and 3d printing in Cardiff.

Research at Manchester will be highlighted in the way we know best – the scientific study of ancient artefacts using modern imaging techniques. At Manchester Museum, the Ancient Worlds gallery played host to a remarkable sight with around 20 animal mummies from the display cases and the stores displayed on rotating platforms and amplified with powerful spot lights. Never before have these mummies been seen in this light and everyone commented on how spectacular the sight was. 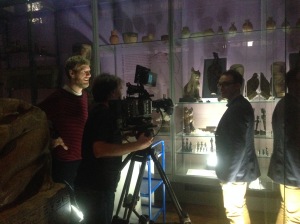 The plan had been to film two subsequent sessions at the radiology department of the Manchester Royal Children’s Hospital, however, as is often the way when using a clinical facility, the plan soon went out of the window and the schedule got further and further behind. Obviously, living patients in need of CT scans take precedence over mummified animals, but luck certainly didn’t seem to be on our side! After the two sessions, we still hadn’t filmed any of the ‘back room’ discussions of our scanning, so a further session was scheduled. That final session took place earlier this evening and we are pleased to say that all the shots required by the producer were acquired, despite human trauma patients, computer issues and a misbehaving lift. I don’t envy the job of Jon, the producer, of trying to edit what must amount to hours of footage taken over several weeks and in several countries, into an hour- long documentary. What I am pleased about is that the animal mummies from Manchester Museum will finally get the moment in the spotlight they deserve! 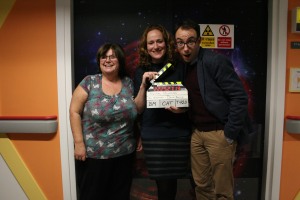